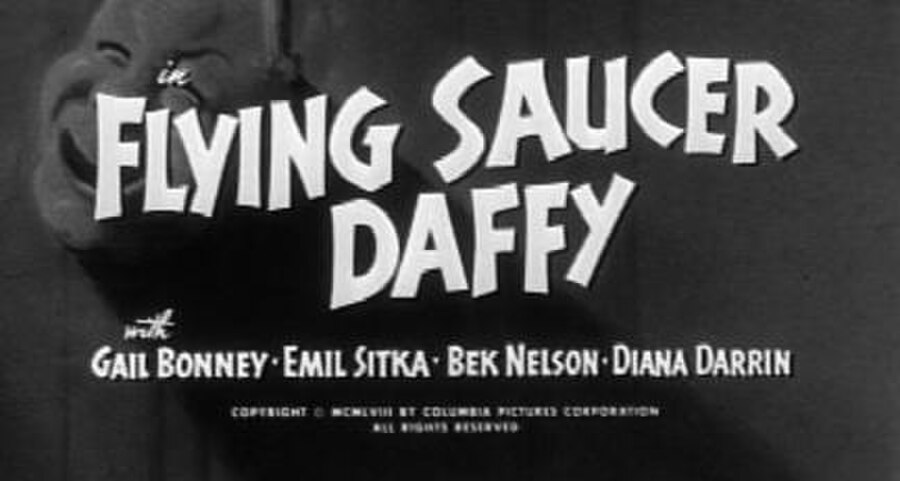 Flying Saucer Daffy is a 1958 short subject directed by Jules White starring American slapstick comedy team The Three Stooges (Moe Howard, Larry Fine and Joe Besser). It is the 187th entry in the series released by Columbia Pictures starring the comedians, who released 190 shorts for the studio between 1934 and 1959.

Joe's accidental snapshot of a paper plate blown by a breeze, is mistaken for a picture of a UFO. However, Moe and Larry take the credit for the photo, and are paid a huge sum while Joe is reduced to the status of their servant. Moe and Larry are arrested when their UFO picture is revealed to be a fraud by the government. Angered, the older woman servant, banishes joe for causing the arrests of both Moe and Larry, Joe isolated himself with a camping trip, only to meet two genuine and beautiful aliens from Planet Zircon who allow Joe to photograph them. Moe and Larry are released from jail briefly on probation to allow themselves to pay back the government for the fraudulent photo, when Joe arrived with the great news, in which the other stooges don't believe, and repeatedly strike Joe, until joe manages to strike both stooges and the older woman unconsciously. Joe becomes a national hero, celebrating his photo achievement while riding with his new beautiful aliens in a ticker-tape parade; Moe and Larry are put in straitjackets and incarcerated in a psychiatric hospital.