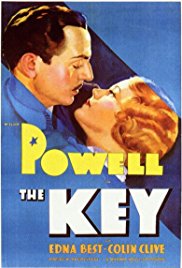 The Key is a 1934 American Pre-Code film directed by Michael Curtiz. It was re-issued as High Peril (pre-release title Sue of Fury) in 1960.

Captain Bill Tennant (William Powell) is a British officer stationed in Dublin in 1920. Tennant has a history with Norah, the wife of his friend, British intelligence officer Captain Andrew Kerr.