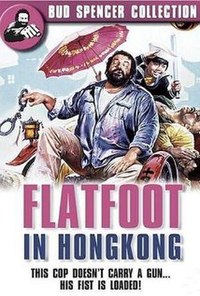 Flatfoot in Hong Kong (original title: Piedone a Hong Kong and also known as Flatfoot Goes East and Le Cogneur) is a 1975 crime comedy film. It is the second film of the Flatfoot (Piedone) tetralogy.

The police prepares to trap the Drug Lord of Naples. The plan fails and Rizzo (Bud Spencer) decides to interrogate him for the last time, but when he arrives the Drug Lord has been murdered. Rizzo is accused of the murder and decides to investigate the arrival of an Italian-American Mafia member, Frank Barella (Al Lettieri). The information given by Barella and Ferramenti (Dominic Barto) makes Rizzo believe that there is a rat in the police department, and, therefore, he must go to the Far East to find out who he is. On his way through Thailand, Hong Kong and Macau, Rizzo encounters Barella, and this leads him to believe who is the corrupt police senior.