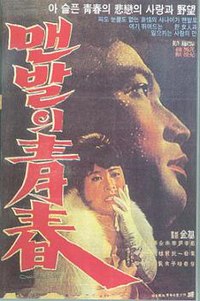 Barefooted Youth (Hangul: 맨발의 청춘 - Maenbaleui cheongchun) is a 1964 South Korean film directed by Kim Ki-duk. It is one of the best-known examples of the "adolescent film" genre that was popular in South Korea during the 1960s. In 1997, it was adapted as a television series starring Bae Yong-joon and Ko So-young.