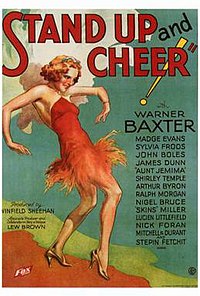 Stand Up and Cheer! is a 1934 American Pre-Code musical film directed by Hamilton MacFadden. The screenplay by Lew Brown and Ralph Spence was based upon a story idea by Will Rogers and Philip Klein. The film is about efforts undertaken during the Great Depression to boost the morale of the country. It is essentially a vehicle for a string of vaudeville acts and a few musical numbers. The film is best known for providing the first big breakthrough role for legendary child actress Shirley Temple. A little known bit player before the film, by the end of the year, she appeared in 10 movies, including 4 starring roles in major feature-length films.

The President of the United States decides that the true cause of the Great Depression (raging when the film was released) is a loss of "optimism" as a result of a plot by financiers and bankers who are getting rich from the Depression. The President then appoints Lawrence Cromwell as secretary for the newly created Department of Amusement. Cromwell creates an army of entertainers and sends them out across the country. Much of the action centers around Cromwell auditioning acts in his office (with interruptions from janitor "George Bernard Shaw", played by Stepin Fetchit). At the end, as a musical production number breaks forth, Cromwell looks out of his office window and sees the Depression literally, instantaneously lift.