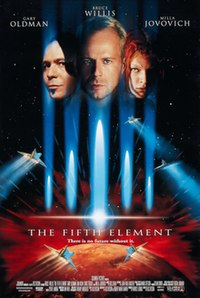 The Fifth Element is a 1997 English-language French science-fiction action film directed and co-written by Luc Besson. It stars Bruce Willis, Gary Oldman, and Milla Jovovich. Primarily set in the 23rd century, the film's central plot involves the survival of planet Earth, which becomes the responsibility of Korben Dallas (Willis), a taxicab driver and former special forces major, after a young woman (Jovovich) falls into his cab. To accomplish this, Dallas joins forces with her to recover four mystical stones essential for the defence of Earth against the impending attack of a malevolent cosmic entity.

In 1914, aliens, known as Mondoshawans, meet their human contact, a priest of a secret order, at an ancient Egyptian temple. They take, for safekeeping, the only weapon capable of defeating a great evil, which appears every 5,000years. They promise to return the weapon before the great evil's re-emergence. The weapon consists of the four classical elements, as four engraved "stones", plus a "fifth element" in a sarcophagus.