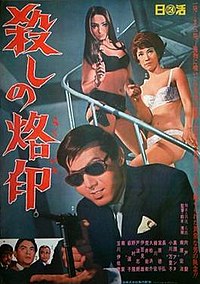 is a 1967 Japanese yakuza film directed by Seijun Suzuki and starring Joe Shishido, Koji Nanbara and Annu Mari. It was a low budget, production line number for the Nikkatsu Company, originally released in a double bill with Shōgorō Nishimura's Burning Nature. The story follows Goro Hanada in his life as a contract killer. He falls in love with a woman named Misako, who recruits him for a seemingly impossible mission. When the mission fails, he becomes hunted by the phantom Number One Killer, whose methods threaten his sanity as much as his life.

Goro Hanada, the Japanese underworld's third-ranked hitman, and his wife, Mami, fly into Tokyo and are met by Kasuga, a formerly ranked hitman turned taxi driver. Kasuga petitions Hanada to assist him in breaking back into the profession. Hanada agrees and the three go to a club owned by the yakuza boss Michihiko Yabuhara. The two men are hired to escort a client from Sagami Beach to Nagano. After the meeting, Yabuhara covertly seduces Hanada's wife.