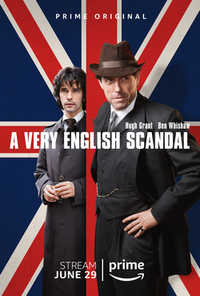 A Very English Scandal is a British television comedy-drama series. The three-part 2018 serial is based on John Preston's 2016 book of the same name. It is a dramatisation of the 1976–1979 Jeremy Thorpe scandal and more than 15 years of events leading up to it.

In 1965, Jeremy Thorpe, a Liberal Member of Parliament, must contend with disgruntled ex-lover Norman Josiffe, whom he met in 1961 and had a relationship with for several years. Thorpe had met Norman when the latter was a 21-year-old stable boy in Oxfordshire and wrote many letters to him, which Norman kept. Norman, who could never quite hold down a job, particularly not after having lost his National Insurance card, was unstable and had a penchant for drama and self-expression, both of which proved increasingly hard to deal with. When Thorpe grew tired of Norman and insisted that he leave the house he had arranged and paid for in London, the young man began to make threats. Thorpe fears exposure and the end of his political career. His fellow Liberal MP, Peter Bessell, keeps Norman silent for the time being with small amounts of money. Norman also requests a new National Insurance card from Thorpe but his request is denied since it would link Thorpe to Norman.