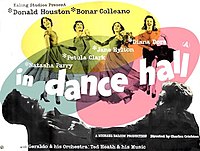 Dance Hall is a 1950 British film directed by Charles Crichton. The film was an unusual departure for Ealing Studios at the time, as it tells the story about four women and their romantic encounters from a female perspective.

The story line centres on four young female factory workers who escape the monotony of their jobs by spending their evenings at the Chiswick Palais, the local dance hall, and having problems with their boyfriends or hoping to find some.