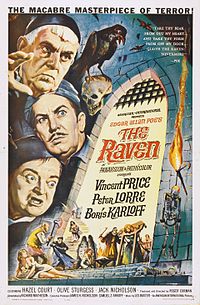 The Raven is a 1963 American comedy horror film produced and directed by Roger Corman. The film stars Vincent Price, Peter Lorre, and Boris Karloff as a trio of rival sorcerers. The supporting cast features a young Jack Nicholson as Lorre's character's son.

Set during the 15th century, the sorcerer Dr. Erasmus Craven (Vincent Price) has been mourning the death of his wife Lenore (Hazel Court) for over two years, much to the chagrin of his daughter Estelle (Olive Sturgess). One night he is visited by a raven, who happens to be a transformed wizard, Dr. Bedlo (Peter Lorre). Together they brew a potion that restores Bedlo to his old self. Bedlo explains he had been transformed by the evil Dr. Scarabus (Boris Karloff) in an unfair duel, and both decide to see Scarabus, Bedlo to exact revenge and Craven to look for his wife's ghost, which Bedlo reportedly saw at Scarabus' castle. After fighting off the attack of Craven's coachman, who apparently acted under the influence of Scarabus, they set out to the castle, joined by Craven's daughter Estelle and Bedlo's son Rexford (Jack Nicholson).