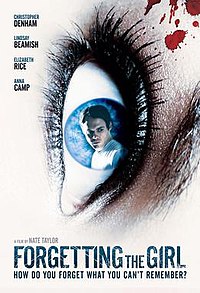 Forgetting the Girl is an independent film directed by Nate Taylor, adapted for the screen by Peter Moore Smith, from his short story of the same name. It wrapped principal photography in August 2009, finished post-production in January 2012. The film had its world premiere at the Cinequest film festival on March 2, 2012. The sold out screening was well received and critics declared the film as "a beautifully dark psychodrama", "an impressive directorial debut" which "delivers something truly original and startling".

Kevin Wolfe is a socially awkward photographer who takes headshots for aspiring models and actresses. He asks them out for dinner or a movie. Most say no to him or are no shows at the date. Beautiful Adrienne surprises him and asks him out. After the date they have sex and the next morning he takes a single picture of her sleeping. Kevin wants a second date but she has no interest. She ignores his many text messages but does meet him for lunch to pick up her photos. She makes sure he knows there will be no relationship. Kevin uses Adrienne's photo for promotion purposes.