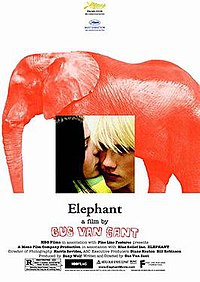 Elephant is a 2003 American psychological drama film written, directed, and edited by Gus Van Sant. It takes place in the fictional Watt High School, in the suburbs of Portland, Oregon, and chronicles the events surrounding a school shooting, based in part on the 1999 Columbine High School massacre. The film begins a short time before the shooting occurs, following the lives of several characters both in and out of school, who are unaware of what is about to unfold. The film stars mostly new or non-professional actors, including John Robinson, Alex Frost, and Eric Deulen.

At the start of the film, John McFarland is being driven to school by his father, who is driving erratically down the road. Noticing the damage done to the car, John realizes that his father is drunk and makes him move to the passenger seat so he can drive. When John arrives at school late, he is reprimanded by the principal, Mr. Luce.