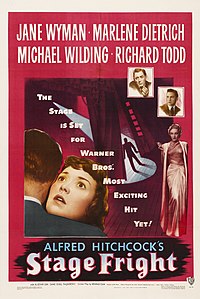 Stage Fright is a 1950 American-British mystery film directed and produced by Alfred Hitchcock and starring Jane Wyman, Marlene Dietrich, Michael Wilding and Richard Todd. Others in the cast include Alastair Sim, Sybil Thorndike, Kay Walsh, Hitchcock's daughter Pat Hitchcock in her movie debut, and Joyce Grenfell in a humorous vignette.

Eve Gill (Jane Wyman) is an aspiring actress at the Royal Academy of Dramatic Art (RADA) in London. She is interrupted in rehearsal by her friend (and crush), actor Jonathan Cooper (Richard Todd), the secret lover of flamboyant stage actress/singer Charlotte Inwood (Marlene Dietrich). Via a flashback, he says Charlotte visited him after killing her husband; she was wearing a bloodstained dress. Jonathan claims he went back to her house for another dress but was seen by Nellie Goode (Kay Walsh), Charlotte's cockney maid/dresser. He escaped the police and needs help.