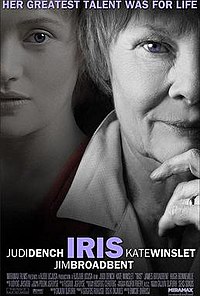 Iris is a 2001 biographical drama film about novelist Iris Murdoch and her relationship with her husband John Bayley. Directed by Richard Eyre from a screenplay he co-wrote with Charles Wood, the film is based on Bayley's 1999 memoir Elegy for Iris. Judi Dench and Jim Broadbent portray Murdoch and Bayley during the later stages of their marriage, while Kate Winslet and Hugh Bonneville appear as the couple in their younger years. The film contrasts the start of their relationship, when Murdoch was an outgoing, dominant individual compared to the timid and scholarly Bayley, and their later life, when Murdoch was suffering from Alzheimer's disease and tended to by a frustrated Bayley in their North Oxford home in Charlbury Road. The beach scenes were filmed at Southwold in Suffolk, one of Murdoch's favourite haunts.

When the young Iris Murdoch meets fellow student John Bayley at Somerville College, Oxford, he is a naive virgin easily flummoxed by her libertine spirit, arch personality, and obvious artistic talent. Decades later, little has changed and the couple keeps house, with John doting on his more famous wife. When Iris begins experiencing forgetfulness and dementia, however, the devoted John struggles with hopelessness and frustration, and becomes her caretaker, as his wife's mind deteriorates from the ravages of Alzheimer's disease.