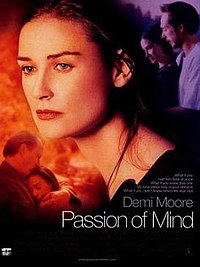 Passion of Mind is a 2000 American psychological romantic drama film starring Demi Moore. It was the first English-language film from Belgian director Alain Berliner, best known for the arthouse success Ma Vie en Rose. The film was panned by the critics and became a box office bomb grossing just $769,272 against its $12 million budget. Moore received a nomination for the Golden Raspberry Award for Worst Actress.

Marty (Moore) is a high-powered single literary agent in Manhattan. Marie (also Moore) is a widow in Provence with two daughters and a peaceful life. Marty has been seeing a therapist (Peter Riegert) to deal with her vivid dreams of Marie's life; when Marie falls asleep she dreams Marty's life, but is much less disturbed by it. Each woman is convinced that the other is a figment of her imagination. When Marty meets Aaron (William Fichtner) they become friends and eventually lovers; terrified that her vivid other life means that she's losing her mind, Marty does not want to tell Aaron about it but finally does. Marie, meanwhile, has met William (Stellan Skarsgård); she too is reluctant to tell William about her dreams, particularly since she (as Marty) is falling in love with Aaron, but realizes that she cannot keep such an important part of her life a secret.