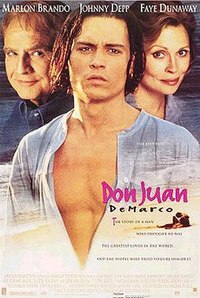 Don Juan DeMarco is a 1995 American romantic comedy-drama film starring Johnny Depp as John Arnold DeMarco, a man who believes himself to be Don Juan, the greatest lover in the world. Clad in a cape and domino mask, DeMarco undergoes psychiatric treatment with Marlon Brando's character, Dr. Jack Mickler, to cure him of his apparent delusion. But the psychiatric sessions have an unexpected effect on the psychiatric staff, some of whom find themselves inspired by DeMarco's delusion; the most profoundly affected is Dr. Mickler himself, who rekindles the romance in his complacent marriage.

John Arnold DeMarco is a 21-year-old man who dresses like Zorro, with a similar mask, hat and cape and claims to be Don Juan. After a passionate affair, he decides to commit suicide. At the site of the billboard he plans to jump off of, psychiatrist Jack Mickler dissuades him by posing as Don Octavio de Flores. John is then held for a ten-day review in a mental institution.