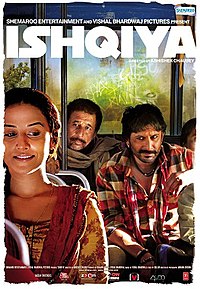 Ishqiya is a 2010 Indian black comedy film starring Naseeruddin Shah, Vidya Balan, Arshad Warsi and Salman Shahid in the lead roles. It was directed by Abhishek Chaubey in his directorial debut, cinematography by Mohana Krishna, and was produced by Raman Maroo and Vishal Bhardwaj. The film was released on 29 January 2010.

Ishqiya starts with Krishna Verma (Vidya Balan) trying to convince her husband, Vidyadhar Verma (Adil Hussain), a local gang-lord, that he should surrender. He agrees but is soon killed in a gas explosion. Two criminals, Iftikhar aka Khalujan (Naseeruddin Shah) and Razzak Hussain aka Babban (Arshad Warsi), botch up a job and escape from the clutches of their boss, Mushtaq (Salman Shahid), who wants to bury them alive. They land up in Gorakhpur in Uttar Pradesh to seek refuge in the house of Vidyadhar Verma.