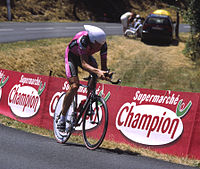 Höllentour (literally meaning "Hell Tour") is a 2004 German film. The US release (with English subtitles) was titled Hell on Wheels. The film is a record of the 100th anniversary Tour de France in 2003 from the perspective of Germany's Team Telekom, focusing on riders Erik Zabel and Rolf Aldag. The film is directed by Pepe Danquart who won an Academy Award for Live Action Short Film in 1993 for Black Rider (Schwarzfahrer).