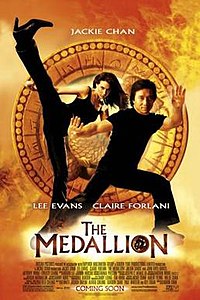 The Medallion is a 2003 action comedy film co-written and directed by the Hong Kong film director Gordon Chan, and starring Jackie Chan, Lee Evans, Claire Forlani, and Julian Sands. It was much less successful than Chan's other American films such as the Rush Hour film series, Shanghai Noon and its sequel, Shanghai Knights. The film was theatrically released on 15 August 2003 in Hong Kong and 22 August 2003 in the United States by TriStar Pictures.

Eddie Yang (Jackie Chan) is a Hong Kong police inspector co-operating with Interpol in the capture of a crime lord named AJ "Snakehead" Staul (Julian Sands). Snakehead procures an ancient book from a Chinese bookstore keeper, which tells the story of a boy being chosen every thousand years to bind the two halves of a legendary medallion. In Hong Kong, Eddie and Interpol agent Arthur Watson (Lee Evans) lead a raid to capture Snakehead and his men, who are about to kidnap the boy, named Jai (Alex Bao). Eddie and the agents fight off Snakehead's men, infiltrating the temple containing Jai. The agents save Jai, but Snakehead eludes them. Two weeks later, Snakehead captures Jai aboard a cargo boat in Hong Kong. Eddie and a team of Hong Kong police engage and defeat several of Snakehead's men, but Snakehead escapes with Jai to Dublin, Ireland.