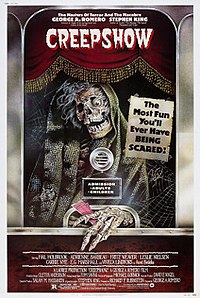 Creepshow is a 1982 American horror comedy anthology film directed by George A. Romero and written by Stephen King, making this film his screenwriting debut. The film's ensemble cast includes Hal Holbrook, Adrienne Barbeau, Fritz Weaver, Leslie Nielsen, Ted Danson and E. G. Marshall, as well as King himself (King's acting debut actually came a year prior in the Romero film Knightriders). The film was primarily shot on location in Pittsburgh and its suburbs, including Monroeville, where Romero leased an old boys academy (Penn Hall) to build extensive sets for the film.

A young boy named Billy Hopkins gets disciplined by his father, Stan Hopkins, for reading a horror comic titled Creepshow. After swiping the comic from Billy and throwing it in the garbage, Stan reminds his wife that he has to be hard on Billy because he does not want their son to read it, calling it "horror crap". As Billy sits upstairs, wishing that his father rots in Hell, he hears a sound at the window. The source of the noise turns out to be The Creep, the host of the comic book, beckoning him to come closer.