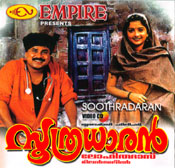 Soothradharan (English: Strategist) is a 2001 Malayalam film written and directed by A. K. Lohithadas. The film stars Dileep and Meera Jasmine in lead roles, while Bindu Panicker, Kalabhavan Mani and Cochin Haneefa playing other important roles.

Ramesan (Dileep) who supports the five member family by selling pickles and other eatables, reaches a border town named Pandavapuram under certain circumstances where he finds the conditions to be truly stark and dreary. Director dwells upon the ordeals of life in Pandavapuram. Ramesan is trying in vain to find his friend Leelakrishnan (Salim Kumar) who acts as a hijada to eke out a living.