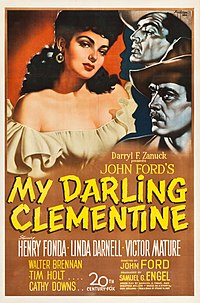 My Darling Clementine is a 1946 American Western film directed by John Ford and starring Henry Fonda as Wyatt Earp during the period leading up to the gunfight at the OK Corral. The ensemble cast also features Victor Mature (as Doc Holliday), Linda Darnell, Walter Brennan, Tim Holt, Cathy Downs and Ward Bond.

In 1882 (a year after the actual gunfight at the O.K. Corral on October 26, 1881), Wyatt, Morgan, Virgil, and James Earp are driving cattle to California when they encounter Old Man Clanton and his sons. He offers to buy their herd, but they curtly refuse to sell. When the Earps learn about the nearby boom town of Tombstone, the older brothers ride in, leaving the youngest, James, as watchman. The threesome soon learns that Tombstone is a lawless town without a marshal. Wyatt proves the only man in the town willing to face a drunken Indian shooting at the townspeople. When the brothers return to their camp, they find their cattle rustled and James murdered.