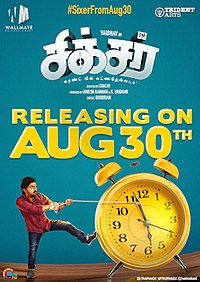 Sixer is a 2019 Indian Tamil language romantic comedy film written and directed by Chachi, marking his directorial debut. The film stars Vaibhav and Palak Lalwani, with Sathish and Radha Ravi playing the supportive roles. M. Ghibran composed music for the film while cinematography was handled by P. G. Muthiah. The story of Sixer follows a person with night blindness, who faces difficulties in routine and love life because of his condition. The film was theatrically released on 30 August 2019. The film is good in most parts.

Aadhi (Vaibhav) is a civil engineer who lives a happy life with his cute family, consisting of his parents (Ilavarasu and Sriranjini). His biggest worry is his nyctalopia, as he cannot see anything after 6PM, so his marriage also becomes a big question mark.