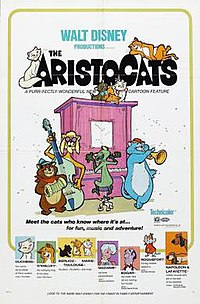 The Aristocats is a 1970 American animated romantic adventure musical comedy film directed by Wolfgang Reitherman. It was produced by Walt Disney Productions and released by Buena Vista Distribution. The 20th Disney animated feature film, the film is based on a story by Tom McGowan and Tom Rowe, and revolves around a family of aristocratic cats, and how an alley cat acquaintance helps them after a butler has kidnapped them to gain his mistress's fortune which was intended to go to them. The film features the voices of Eva Gabor, Hermione Baddeley, Phil Harris, Dean Clark, Sterling Holloway, Scatman Crothers, and Roddy Maude-Roxby.

In Paris 1910, mother cat Duchess and her three kittens, Berlioz, Marie, and Toulouse, live with retired opera diva Madame Adelaide Bonfamille, and her English butler, Edgar. One day while preparing her will with lawyer Georges Hautecourt, Madame declares that her fortune will be left to her cats until their deaths, and thereafter to Edgar. Edgar hears this through a speaking tube and plots to eliminate the cats. He later sedates them by putting sleeping pills in a milk mixture intended for them, and drives them to the countryside to abandon them. There, he is ambushed by two hounds named Napoleon and Lafayette, losing his hat and umbrella, and the cats are stranded in the countryside, while Madame Adelaide, Roquefort the mouse and Frou-Frou the horse discover their absence.