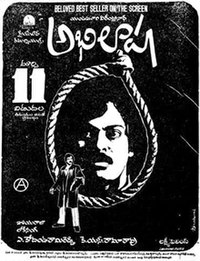 Abhilasha is a 1983 Telugu language film, directed by A. Kodandarami Reddy and produced by K. S. Rama Rao. It is the film adaptation of Yandamuri Veerendranath's novel of the same name. Chiranjeevi, Raadhika, Rao Gopal Rao and Gollapudi Maruthi Rao played vital roles. The super hit music for the movie was scored by Ilaiyaraaja.

Struggling lawyer Chiranjeevi (Chiranjeevi) lives with his roommate (Allu Aravind) and strives for removing IPC Section 302. The reason behind his determination is his father's death sentence under 302 for rape and murder, which he didn't commit.