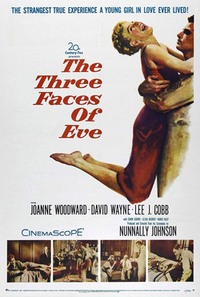 The Three Faces of Eve is a 1957 American mystery drama film presented in CinemaScope, based on the book of the same name about the life of Chris Costner Sizemore, which was written by psychiatrists Corbett H. Thigpen and Hervey M. Cleckley, who also helped write the screenplay. Sizemore, also known as Eve White, was a woman they suggested might have dissociative identity disorder (then known as multiple personality disorder). Sizemore's identity was concealed in interviews about this film and was not revealed to the public until 1977. The film was directed by Nunnally Johnson.

In 1951, Eve White is a timid, self-effacing wife and mother who has severe and blinding headaches and occasional blackouts. Eventually goes to see psychiatrist Dr. Luther, and while having a conversation, a "new personality", the wild, fun-loving Eve Black, emerges. Eve Black knows everything about Eve White, but Eve White is unaware of Eve Black.