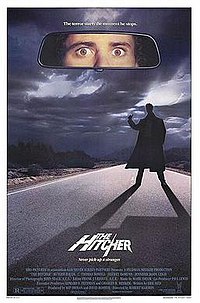 The Hitcher is a 1986 American road thriller film directed by Robert Harmon and written by Eric Red. It stars Rutger Hauer as a seemingly suicidal and homicidal maniac and C. Thomas Howell as his primary victim. It was released in the United States on February 21, 1986. The film was met with tepid critical response and grossed about $5.8 million.

Jim Halsey, a young man delivering a car from Chicago to San Diego, spots a man hitchhiking in the West Texas desert and gives him a ride. The hitcher, John Ryder, is brooding and evasive. When Jim passes a stranded car, Ryder forces his leg down on the accelerator. Ryder states he murdered the driver and intends to do the same to Jim, threatening him with a switchblade. Terrified, Jim asks what Ryder wants. He replies, "I want you to stop me." When Jim realizes that Ryder never put on his seat belt and the car's passenger door is ajar, he shoves him out the door.