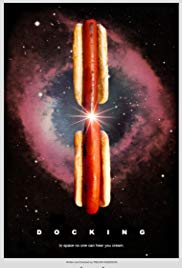 Docking is a Canadian short film, directed by Trevor Anderson and released in 2019. Mostly wordless apart from a brief introductory narration by Anderson, the film metaphorically explores his fears and insecurities about dating as a gay man through the depiction of a large penis flying alone through space until meeting another penis and docking with it.