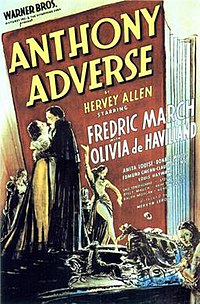 Anthony Adverse is a 1936 American epic historical drama film directed by Mervyn LeRoy and starring Fredric March and Olivia de Havilland. The screenplay by Sheridan Gibney draws elements of its plot from eight of the nine volumes in Hervey Allen's enormous historical novel, . Abandoned at a convent as an infant, Anthony comes of age in the tumultuous turn of the 18th to the 19th century, the age of Napoleon. The audience is privy to many truths in Anthony's life, including the tragic story of his origins and the fact that the wealthy merchant who adopts him is his grandfather. Most important of all, Anthony believes that his beloved Angela abandoned him without a word, when in fact she left a note telling him that the theatrical troupe was going to Rome. The gust of wind that blows the note away is one of many fateful and fatal events in Anthony's story.

In 1773, young Scottish beauty Maria Bonnyfeather (Anita Louise) is the new bride of the cruel and devious middle-aged Spanish nobleman Marquis Don Luis (Claude Rains). Don Luis suffers horribly from gout, so the consummation of their marriage must be postponed until his cure at a famous spa is complete. Meanwhile, Maria’s true love, Denis Moore (Louis Hayward), the man she loved before being forced to marry Don Luis, follows them and stays near the château where they are living. While the marquis is away taking the cure, they contrive to meet in the woods, and after 3 months Maria tells him she is carrying his child. The marquis returns home, cured, and Maria is horrified at what awaits her. The lovers plan to flee that night, but the marquis discovers Maria waiting for Denis. Don Luis takes her across Europe, but Denis at last tracks them down at an inn, where Don Luis treacherously kills him in a sword duel.