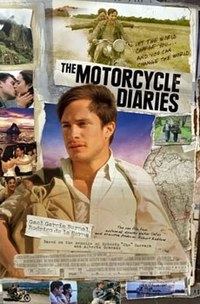 The Motorcycle Diaries is a 2004 biopic about the journey and written memoir of the 23-year-old Ernesto Guevara, who would several years later become internationally known as the iconic Marxist guerrilla commander and revolutionary Che Guevara. The film recounts the 1952 expedition, initially by motorcycle, across South America by Guevara and his friend Alberto Granado. As well as being a road movie, the film is a coming-of-age film; as the adventure, initially centered on youthful hedonism, unfolds, Guevara discovers himself transformed by his observations on the life of the impoverished indigenous peasantry. Through the characters they encounter on their continental trek, Guevara and Granado witness first hand the injustices that the destitute face and are exposed to people and social classes they would have never encountered otherwise. To their surprise, the road presents to them both a genuine and captivating picture of Latin American identity. As a result, the trip also plants the initial seed of cognitive dissonance and radicalization within Guevara, who would later view armed revolution as a way to challenge the continent's endemic economic inequalities and political repression.

In 1952, a semester before Ernesto "Fuser" Guevara is due to complete his medical degree, he and his older friend Alberto Granado, a biochemist, leave Buenos Aires in order to travel across South America. While there is a goal at the end of their journey - they intend to work in a leper colony in Peru - the main purpose is initially fun and adventure. They desire to see as much of Latin America as they can, more than in just four and a half months, while Granado's purpose is also to bed as many women as will fall for his pickup lines. Their initial method of transport is Granado's dilapidated Norton 500 motorcycle christened La Poderosa ("The Mighty One").