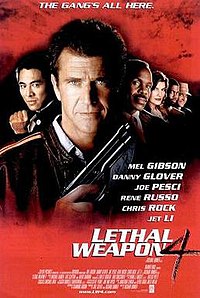 Lethal Weapon 4 is a 1998 American buddy cop action film directed and produced by Richard Donner, and starring Mel Gibson, Danny Glover, Joe Pesci, Rene Russo, Chris Rock, and Jet Li (in his international film debut). It is the fourth installment in the Lethal Weapon film series. It is the last film in the series directed by Donner before his death, and the last to be released theatrically.

Lorna Cole is pregnant with LAPD Sergeant Martin Riggs' baby; they are not married, but both are thinking about it. LAPD Sergeant Roger Murtaugh's daughter Rianne, is also pregnant. Due to issues with the department's insurance carrier over Riggs and Murtaugh's actions as sergeants, the Police Chief has Captain Murphy promote them to captains.