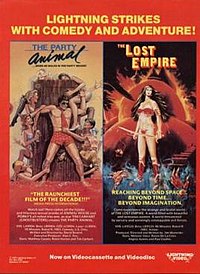 The Lost Empire is a 1984 American fantasy adventure film directed by Jim Wynorski. It was the first feature Wynorski directed.

The film opens at a jewelry shop in Chinatown, which contains a statue with one glowing red eye. Three masked figures kill the store's owner, then try to pry the eye free. The police arrive, and after a bloody fight, all of the intruders and all but one of the policemen are dead, with the lone survivor being seriously wounded.