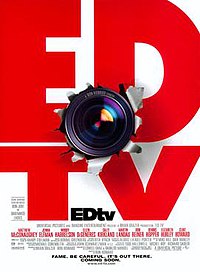 Television channel True TV is commencing interviews for a TV show that shows a normal person's life 24/7. This idea was thought up by a TV producer Cynthia (Ellen DeGeneres). They interview Ed Pekurny (Matthew McConaughey) and his brother, Ray (Woody Harrelson). When the producers see the interview Cynthia decides to use Ed and interviews only Ed. The show hits the airwaves under the title "Ed TV." It is a total failure at first, as only boring things happen and the producers want to pull the plug, except for Cynthia.