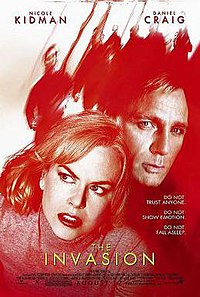 The Invasion is a 2007 American science fiction horror film directed by Oliver Hirschbiegel, with additional scenes written by The Wachowskis and directed by James McTeigue, and starring Nicole Kidman and Daniel Craig. The plot follows a Washington, D.C. psychiatrist (Kidman) who finds those around her turning into emotionless beings shortly after a major space shuttle crash.

After the Space Shuttle Patriot crashes on Earth, a fungus-like alien lifeform is discovered on the remaining parts scattered widely over the United States. Once people are infected by the organism, and REM sleep occurs, the organism takes control. One of the first people infected is Tucker Kaufman, a CDC director investigating the crash.