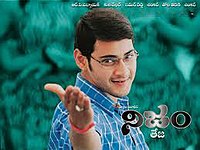 Nijam is a 2003 Indian Telugu-language action film produced & directed by Teja on Chitram Movies banner. The film stars Mahesh Babu, Rakshita, Gopichand, Raasi in the lead roles and music was composed by R. P. Patnaik. Initially Jyothika was considered as the lead role but later replaced. Mahesh Babu and Rameshwari won the Nandi Awards in Best Actor and Best Supporting Actress categories respectively. It was remade as Arjuna in Odia starring Anubhav Mohanty and Gargi Mohanty and also this movie was remade as Top Leader in Bengali Bangladesh starring Shakib Khan.

Sidda Reddy (Jaya Prakash Reddy) is a powerful mafia leader whose right hand is Devudu (Gopichand). Devudu has a lover called Malli (Raasi). Reddy, who also likes Malli, takes her to the bed, which is not liked by Devudu. In the process, Devudu kills Reddy and becomes the leader of the mafia gang. Venkateswarlu (Ranganath) is a fire officer. In an incident, Devudu sets a marketplace on fire and Venkateswarlu rescues it with his firefighting, and at the same time, Venkateswarlu slaps Devudu, as he continues throwing kerosene at the marketplace. Devudu holds a grudge against Venkateswarlu and sends him to jail on a framed charge of murder of Malli's brother Baddu (Suman Setty). G. Seetaram (Mahesh Babu), Venkateswarlu's son, tries to rescue his father from the jaws of police. But in the process, everybody starts asking him for bribe to do the work. At the end of the day, the police officer and Devudu kills Venkateswarlu. The rest of the story is about how Seetaram's mother (Talluri Rameswari) takes revenge on the people responsible for the death of her husband with the help of her son Seetaram. The criminals involved in the crime of his father's death are killed one after the other by the mother and son in a planned and scientific manner. This film tells about an innocent boy, who, along with his mother undergoes injustice and also loses his father in this process. The mother in this situation plays the role of a trainer and guide to her son, making him strong physically and emotionally, to fight back.