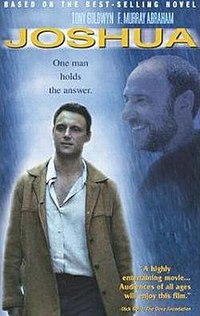 Joshua is a 2002 American drama film based on the novel of the same name by Joseph F. Girzone. It was produced by Crusader Entertainment LLC and directed by Jon Purdy.

The movie is about a mysterious man named Joshua (Tony Goldwyn) who appears in a small town named Auburn and begins changing the lives of everyone he meets, simply by being around them.