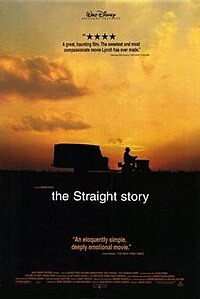 The Straight Story is a 1999 biographical road drama film directed by David Lynch. The film was edited and produced by Mary Sweeney, Lynch's longtime partner and collaborator. She also co-wrote the script with John E. Roach. The film is based on the true story of Alvin Straight's 1994 journey across Iowa and Wisconsin on a lawn mower. Alvin (Richard Farnsworth) is an elderly World War II veteran who lives with his daughter Rose (Sissy Spacek), a kind woman with an intellectual disability. When he hears that his estranged brother Lyle (Harry Dean Stanton) has suffered a stroke, Alvin makes up his mind to visit him and hopefully make amends before he dies. Because Alvin's legs and eyes are too impaired for him to receive a driving license, he hitches a trailer to his recently purchased thirty-year-old John Deere 110 Lawn Tractor, having a maximum speed of about and sets off on the journey from Laurens, Iowa to Mount Zion, Wisconsin.

Alvin Straight fails to show up to his regular bar meeting with friends and is eventually found lying on his kitchen floor. His daughter, Rose, takes her reluctant father to see a doctor, who sternly admonishes Alvin to give up tobacco and use a walking frame. Alvin refuses and instead opts to use two canes.