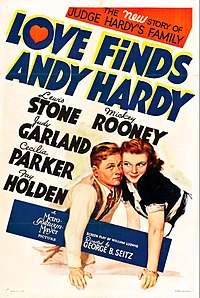 It is December 1938 in the town of Carvel. Andy Hardy (Mickey Rooney) is putting a down payment on a used car, desperate to take his girlfriend Polly Benedict (Ann Rutherford) to the Christmas Eve dance in his own car. When Polly tells Andy she will be visiting her grandmother for the next three weeks and will not be able to attend the Christmas Eve dance with him, Andy vows to attend the dance alone. Judge Hardy (Lewis Stone), Andy’s father, later encounters his son, who broaches the subject of car ownership, but Judge Hardy tells Andy that he cannot have his own car.