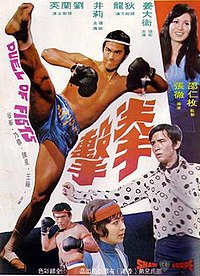 Duel of Fists (; Quan Ji or Kuen gik) is a 1971 Hong Kong martial arts film directed by Chang Cheh and starring David Chiang and Ti Lung. Filmed on location in Bangkok, the story concerns a Hong Kong engineer (Chiang) who goes to Thailand to find his long-lost half-brother (Ti Lung), who is a Muay Thai boxer.

Fan Ko, an engineering architect in Hong Kong who is also highly skilled in martial arts, is called to the bedside of his dying father, who reveals that he long ago had an affair with a woman in Thailand, who bore him a son. He begs Fan Ko to go to Thailand and find the young man, and shows him an old photo, taken when the brother was perhaps 10 years old. But even then, the fierce-looking boy was training in the Thai martial art, Muay Thai, and sported a tattoo on his left arm of a ship's anchor and a swallow flying underneath.