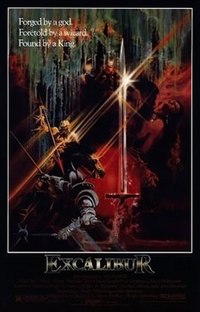 Excalibur is a 1981 American epic medieval fantasy film directed, produced, and co-written by John Boorman that retells the legend of King Arthur and the knights of the Round Table, based on the 15th-century Arthurian romance Le Morte d'Arthur by Thomas Malory. It stars Nigel Terry as Arthur, Nicol Williamson as Merlin, Nicholas Clay as Lancelot, Cherie Lunghi as Guenevere, Helen Mirren as Morgana, Liam Neeson as Gawain, Gabriel Byrne as Uther Pendragon, Corin Redgrave as Gorlois, Duke of Cornwall, and Patrick Stewart as Leondegrance. The film is named after the legendary sword of King Arthur that features prominently in Arthurian literature. The film's soundtrack features the music of Richard Wagner and Carl Orff, along with an original score by Trevor Jones.

The sorcerer Merlin retrieves Excalibur from the Lady of the Lake for Uther Pendragon, who secures a brief alliance with the Duke of Cornwall. Merlin agrees to help Uther seduce Cornwall's wife, Igrayne, on the condition that he give Merlin whatever results from his lust. Merlin transforms Uther into Cornwall's likeness with the Charm of Making. Cornwall's daughter Morgana senses her father's mortal injury during his assault on Uther's camp. While Igrayne is fooled and Uther impregnates her, Morgana sees through it, watching Uther as Cornwall dies in battle. Nine months later, Merlin takes Uther's son Arthur. Uther pursues but is killed by Cornwall's knights. Uther thrusts Excalibur into a stone, crying that "Nobody shall wield Excalibur, but me!", and Merlin proclaims, "He who draws the sword from the stone, he shall be king."