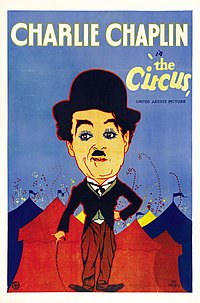 The Circus is a 1928 silent film written, produced, and directed by Charlie Chaplin. The film stars Chaplin, Al Ernest Garcia, Merna Kennedy, Harry Crocker, George Davis and Henry Bergman. The ringmaster of an impoverished circus hires Chaplin's Little Tramp as a clown, but discovers that he can only be funny unintentionally.

At a circus midway, the penniless and hungry Tramp (Chaplin) is mistaken for a condemnable pickpocket and chased by both the police and the real crook (the latter having stashed a stolen wallet and watch in the Tramp's pocket to avoid detection). Running away, the Tramp stumbles into the middle of a performance and unknowingly becomes the hit of the show.