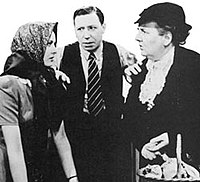 Turned Out Nice Again is a 1941 British comedy film directed by Marcel Varnel and starring the Lancashire-born comedian George Formby.

George Pearson, an employee at an underwear factory, is caught between his modern wife and his meddling mother. After buying a special yarn and getting his wife to promote it, he has an argument with his boss, Mr Dawson who insults Pearson's wife and refuses to apologise. Pearson then resigns. After finding out that the yarn is actually worth a fair amount, Mr Dawson tries to buy it from Pearson but he has some competition.