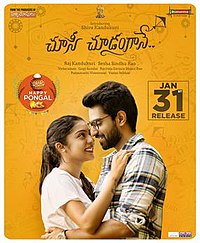 Choosi Choodangaane is a Telugu-language romantic comedy produced by Raj Kandukuri under the banner Dharmapatha Creations, directed by Sesha Sindhu Rao. The film is introducing Shiva Kandukuri, Varsha Bollamma and Malavika Satheesan in the lead roles. The film's music is composed by Gopi Sundar, while cinematography and editing are handled by Vedaraman and Raviteja Girijala respectively. The film released on 31 January 2020 and is being distributed by Suresh Productions.

Choosi Choodangaane is a coming of age romantic comedy film set in Hyderabad. It is the story of Siddu (Shiva Kandukuri), through different stages of life. His relationship with his parents (Anish Y Kurivilla and Pavithra Lokesh), his struggles in his career, friendship and how he falls in love with Aishwarya (Malavika Satheesan) in college and what happens when he meets Shruti (Varsha Bollamma) at a later part in his life is depicted through this film. Siddu (Shiva Kandukuri) is portrayed as a wedding photographer in the film, while Shruti is a music composer and drummer in a band. The film uses a fourth wall narrative style in places and also has multiple perspectives portrayed.