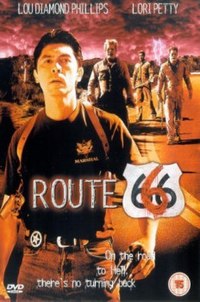 Route 666 is a 2001 action horror film directed by William Wesley and starring Lou Diamond Phillips, Lori Petty, Steven Williams, L.Q. Jones, Dale Midkiff, Alex McArthur, and Mercedes Colon. In the film, government agents are besieged by the ghosts of a massacred chain gang while driving down a desert highway.

Sitting alone at a roadside bar in Arizona, Fred "Rabbit" Smith (Williams) drinks nervously. Two people named Jack La Roca (Phillips) and Stephanie (Petty) enter the bar. Rabbit uses the restroom followed by Jack who handcuffs him. He reveals that he and Steph are Federal Marshals assigned to capture Rabbit and bring him to court in Los Angeles to testify against a mob boss named Benny (Sven-Ole Thorsen) who Rabbit used to work for. He was originally going to testify in exchange for full immunity but ran after learning the mob joined forces with the Russians. They are hunting him, too. Jack calls for a Suburban driven by four other marshals to pick them up before Benny and his mob arrive with heavy firepower. They leave out the back and battle the assassins until marshals; Nick, Mary, PT and Joe arrive between them. They manage to kill all assassins but Benny. Jack and Rabbit use Rabbit's car to escape in the same path as the other marshals (including Steph in the truck). Jack manages to shoot Benny's tires out before leaving.