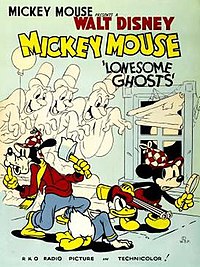 Lonesome Ghosts is a 1937 Disney animated cartoon, released through RKO Radio Pictures on December 24, 1937, three days after Snow White and the Seven Dwarfs (1937). It was directed by Burt Gillett and animated by Izzy Klein, Ed Love, Milt Kahl, Marvin Woodward, Bob Wickersham, Clyde Geronimi, Dick Huemer, Dick Williams, Art Babbitt and Rex Cox. The short features Mickey Mouse, Donald Duck and Goofy as members of The Ajax Ghost Exterminators. It was the 98th short in the Mickey Mouse film series to be released, and the ninth for that year.

The Ajax Ghost Exterminators - Mickey, Donald and Goofy - are hired by telephone to drive out four ghosts from a haunted house that has long been abandoned. Unbeknownst to them, however, they were called by the ghosts themselves, who are bored because nobody has visited the house since they had been haunting for a long time (either because none of the locals were scared or they had scared them all away, as one ghost puts it: "Guess we're too good!"). They wish to play tricks on the living, and do so through a series of inventive, annoying pranks.