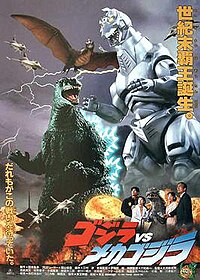 , is a 1993 Japanese kaiju film directed by Takao Okawara, written by Wataru Mimura, and produced by Shōgo Tomiyama. Produced and distributed by Toho Studios, it is the 20th film in the Godzilla franchise, as well as the fifth film to be released during the franchise's Heisei period. The film features the fictional monster character Godzilla, along with Baby Godzilla and the mecha character Mechagodzilla. Despite its Japanese and English titles, the film is not a sequel to the 1974 film Godzilla vs. Mechagodzilla.

In 1992, the United Nations establishes the United Nations Godzilla Countermeasures Center (UNGCC) to stop Godzilla. The mechanical middle head of Mecha-King Ghidorah is salvaged by the UNGCC's military branch, known as G-Force, following its battle with Godzilla and reverse engineered to create two anti-Godzilla machines, the first being an aerial gunship called Garuda and a mecha modeled after Godzilla called Mechagodzilla.