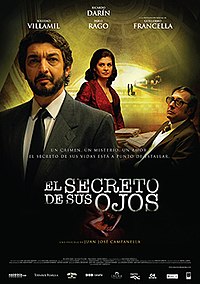 The Secret in Their Eyes is a 2009 crime drama film directed, co-written, produced and edited by Juan José Campanella, based on the novel La pregunta de sus ojos (The Question in Their Eyes) by Eduardo Sacheri, who also co-wrote the screenplay. The film is a joint production of Argentine and Spanish companies.

In June 1974, judiciary agent Benjamin Espósito investigates the rape and murder of Liliana Colotto de Morales. Espósito promises her husband Ricardo he will find the killer and give him a life sentence. Espósito is helped by his alcoholic partner Pablo Sandóval and the new department chief Irene Menéndez-Hastings. Romano, Espósito's rival, accuses two immigrant workers of the murder, which angers Espósito upon discovering that both of them were tortured to obtain a confession.