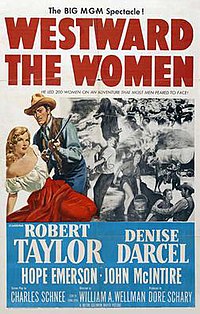 Westward the Women is a 1951 Western film directed by William A. Wellman and starring Robert Taylor, Denise Darcel and John McIntire.

In 1851, Roy Whitman (John McIntire) decides to bring marriageable women west to California to join the lonely men of Whitman's Valley, hoping the couples will put down roots and settle there. Roy hires a skeptical, experienced wagon master, Buck Wyatt (Robert Taylor), to lead the wagon train along the California Trail. In Chicago, Roy recruits 138 "good women", after they have been warned of the journey's hardships and dangers by Buck, who flatly states up to a third of them might not survive the journey. The women range from Patience (Hope Emerson), an older widow from New Bedford seeking a new start after losing her sea captain husband and sons when their clipper went down while attempting to round Cape Horn, to Rose Meyers (Beverly Dennis), a pregnant, unmarried woman running from her shame. Telling the women about his valley, Roy encourages them to pick their prospective mates from daguerreotype pictures he has tacked to a display board. Two showgirls, Fifi Danon (Denise Darcel) and Laurie Smith (Julie Bishop), hastily change their flashy clothes when others like them are rejected, and return to try and sign on again. Whitman is not fooled by their disguise, but convinced their wish to reform is sincere he adds them to the group, bringing the number of women on the wagon train up to 140.