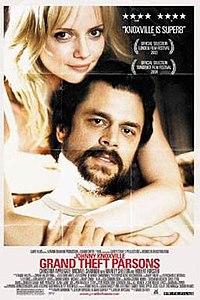 Grand Theft Parsons is a 2003 comedy-drama film based on the true story of country rock musician Gram Parsons (played by Gabriel Macht), who died of an overdose in 1973. Parsons and his road manager, Phil Kaufman (Johnny Knoxville), made a pact in life that whoever died first would be cremated by the other in what was then the Joshua Tree National Monument, an area of desert they both loved and cherished.

The death of singer Gram Parsons prompts Phil Kaufman to fulfill his promise and a subtle black comedy unwinds, with Kaufman bribing mortuary personnel, renting a psychedelic hearse from Larry Oster-Berg, and trekking across the southern California desert, pursued all the while by Parsons' ex-girlfriend with Kaufman's girlfriend and Parsons’ stepfather.