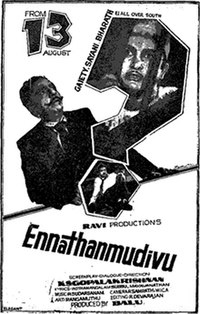 Ennathan Mudivu is a 1965 Indian Tamil-language thriller film written and directed by K. S. Gopalakrishnan. It is based on Panimalai, a novel written by Maharishi. The film stars A. V. M. Rajan and T. S. Balaiah in the lead roles . It was released on 13 August 1965 and received critical acclaim, but failed commercially.

A just-released convict plans revenge against the man who framed him for two crimes.